Send In the Clowns with Meria & Dave McGowan – Laurel Canyon 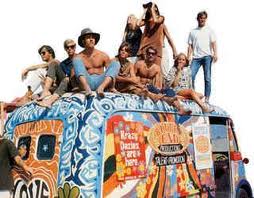 4/30/08 Today Meria & her co-host Dave McGowan take on the crazy “doings” in Laurel Canyon and the manipulation of our minds during the 60’s. The hippie/love child movement vs. the true anti-war movement in the 60’s – were we all duped? Pied Pipers, all? What do Jackson Brown, Crosby, Stills, Jim Morrison, Frank Zappa, Mamas & Papas, and tons of other “performers” have in common? Military/Intel backgrounds; were we all set up? Jim Morrison the lizard king? What did his father do during Vietnam and the Gulf of Tonkin fabrication? Who’s wife heard voices in her head? How many killed in Laurel Canyon? Where the heck is Laurel Canyon? the birthplace of the 60’s counterculture – why? Was talent only found in Military/Intel families? were the hippies an Intel op? Timothy Leary’s garbage; Charles Manson and his friends; murders in Laurel Canyon; Dave’s hit on a very interesting topic this time!