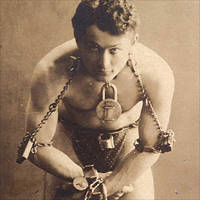 6/2/08 Another segment of Send In the Clowns with Dave McGowan and Meria. The story of Laurel Canyon continues; What and where is Laurel Canyon? lots of 60’s rockers came from LC; Harry Houdini’s creepy house – he died on Halloween, his house burned on Halloween and other Halloween happenings; the caves and tunnels; Houdini – intell operator (the movie The Prestige); Chuck Barris – CIA; Laurel Canyon “for desirable people only” – a “masculine retreat for wealthy people”; vigilante groups in the 1800’s; Rebel Without A Cause – 4 out of 5 stars  murdered; Lookout Mountain Laboratory – full motion picture studio; 19,000 “classified” films; the stars connected to it – Reagan, Monroe, Bing, Disney; who was Judee Sill? and more strangeness.