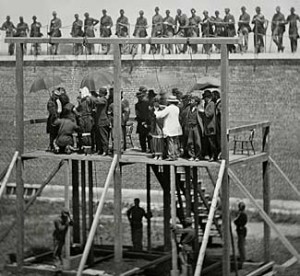 Hung Without a Word

7/20/11 Send In the Clowns continues with Meria & Dave McGowan on the Lincoln “trial”. What was the purpose of the Casey Anthony trial? Fukishima ignored in the media, public opinion swayed by the media; Casey’s trial as a distraction; a psyop to turn off to jury trials? Was it an open and shut case? Cause of death, time, etc never determined. Vindication the system works; character assassination due to lack of evidence; Lincoln’s suspects  trial by military tribunal; 8 suspects who were tortured, confined and NEVER allowed to talk; paid false witnesses – who were they? extreme bias; false evidence; floating cipher note (not even wet); purjured testimonies accepted; NDP detectives; wrong photo at trial; drugged convicts; Medieval treatment/torture.