Send In the Clowns – with Meria & Dave McGowan – Laurel Canyon 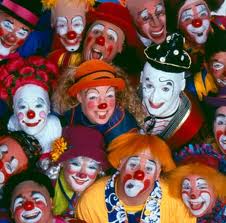 Send In the Clowns Alright!

Newest “Send in the Clowns” with Meria & Dave McGowan. “American Pie” – lyrics reference a series of tragedies; Gram Parsons, only one solo album; who was his girlfriend? Flying Burritos; Phil Kaufman-buddy of Manson; Was Brian Jones murdered? Peter Torks Laurel Canyon home; the Altamont “free concert” with a murder in front of the stage while the band played on;murderer gets murdered; George Lucas was there along with Vito & the Freaks; the set-up of a ritual murder; Why did the Stones hire the Hells Angels for protection? Who is Owsley, Mr. LSD; STP – a biowarfare agent; Grams house burned down; out of service hearse picked up Grams body then ritually burned it; and more of the usual unusual stuff at LC.