Golden Oldie: Meria With Eustace Mullins -The Secrets of the Federal Reserve (1955) 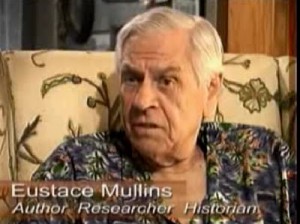 12/17/10 With great pleasure Meria Heller reposts her interview with the one and only Eustace Mullins on his fabulous book “The Secrets of the Federal Reserve”. Eustace died 2/2/10, but his work is a classic. Who was Ezra Pound? Why did the U.S. imprison him for 13 years without charge? Why was Eustace book banned and burned? Who sets the price for gold and oil? Is an anti-Zionist an anti-semite? Woodrow Wilson – a traitor? the war of 1812; Do we pay taxes to London? Congress null and void since 1913; U.S. bankrupt since 1933; Eustace proves the Bank of England runs the U.S. economy; JFK; Central Banks and the Rothschilds; Why hasn’t Congress repealed this act?

One Response to "Golden Oldie: Meria With Eustace Mullins -The Secrets of the Federal Reserve (1955)"