Posted about 9 years ago | 9 comments 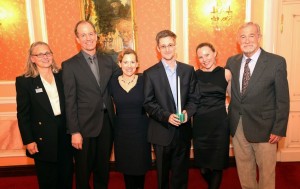 11/19/13 Meria interviews former CIA Analyst Ray McGovern. We discuss everything from JFK to Ed Snowden. Ray was assaulted at Hillary Clinton event while she spoke of freedom of expression (71 yrs old); Receiving the Soviet Union treatment; he had his knapsack of white privilege in jail; Ray’s visit to Russia and talk with Ed Snowden, Patriot; the Sam Adams Associates; honoring those who speak out; whistleblower awards; Tom Fingar, little known yet prevented war with Iran; the Russia/Syria/Kerry/Israeli debacle; the prostitution of the 4th Amendment; where’s probable cause for spying on all Americans? The President’s “list”; the parallels with 1933 Germany; the Reichstag Fire and 9/11/01; the liars in D.C.; Tom Drake, Manning, Assange, Snowden; Snowden is safe in Russia; “courage is contagious”; Is it still possible to be patriotic? turnkey tyranny; “JFK and the Unspeakable” (see archives).

Support truly independent media with a subscription of choice. Total access to site 24/7. Thank you.