01192022Headline:
Home Assassinations Send In the Clowns with Meria and Dave McGowan 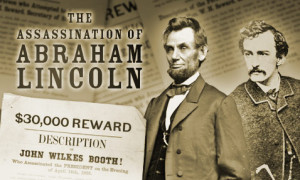 2/17/15 Send In the Clowns with Meria and Dave McGowan. The Lincoln series continues as ridiculous as it was told to us;Latest on Dave’s new book; dozens of people aided and abetted the supposed assassin, most never charged; Dr.Mudd doing his job as a doctor went to jail – he said it was NOT John Wilkes Booth; theater hand Ned Spangler too;surprise: telegraph and gas (for lights) both went down for hours;lack of body guard;broken lock on box; curfew broken to allow escape;similar to 9/11/01-no real repercussions;no autopsy-buried 40 hrs after shot;no real positive IDs; similar to Bin Laden floating in the sea;why didn’t they take Wilkes alive if barn was surrounded? what happened to the horses? crossing the Potomac;Lincoln was hated, similar to George W in many ways;assassination made Lincoln a “saint”; just how did the posse find him? great show. Same M.O. used to this day for most false flag attempts and cover ups.