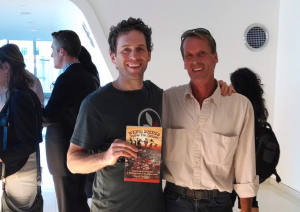 9/17/14 Send In the Clowns with Meria and Dave McGowan. Lots of fun with this show today. Dave’s meeting with Glenn Howerton and William Morris Agency;Was Woodstock an MK-Ultra experiment? Free drugs for all? kids basically trapped there like after Katrina; suffered deprivation of food, water, sanitation, but loads of free drugs; the anti war movement of the 60’s and Timothy Leary’s “advice”; who financed it? Ayahuasca today; Back to the Apollo Moon mission lies; NASA basically admits they don’t have the technology to do it today but managed to pull it off in the 60’s? Shrapnel on Moon;Structural vibration;heat shield;radiation beyond low Earth Orbit; McGowan’s war 1858; militarization of our schools; schools have their own police septs;Is it really “surplus” gear? Police State America since 9/11/01; start thinking folks;Back to Lincoln’s assassination and the fabled attacked on Seward and lots more.