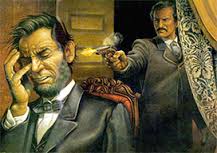 4/21/15 Send In the Clowns with Meria and Dave McGowan. Back to the Lincoln assassination (why so little in the press?); No fanfare on the 150th anniversary, nor the 2nd anniv of Boston Bombing; the tie ins with all false flags – same M.O.; See Dave’s work on Boston here; Tsarnaev railroaded, his defense might as well have been the prosecutor;no case presented at all;perjury blatant;no photos/videos of trial? John Wilkes Booth -less than 40 hours to dispose of his body ala Bin Laden style;His family,friends,co-actors,co-conspirators not allowed to ID the body; Senator said he saw NO evidence it was Booth; no autopsy;screams of Hoax around D.C. and the country;Parallels with JFK assassination; dead witnesses;Baker was a known liar, yet his word stands;the Former UK first lady Cherie Blair a descendant of Booth;Clare Boothe Luce and her CIA asset husband;bonanza of planted evidence similar to 9/11. Once you figure out the M.O. of a false flag it becomes easy to spot them.