Posted about 6 years ago | 4 comments 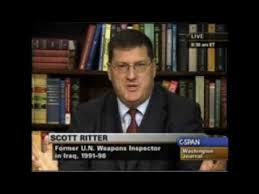 1/27/17 Meria found one of her interviews with Scott Ritter, Former UN Weapons Inspector, dated 3/3/04. Scott spent 7 years in Iraq as UN Weapons Inspector, finding NO Weapons of Mass Destruction as trump likes to blame intel. It wasn’t intel that Bush & Co wanted to start their pre-planned war (before he stole the election). Scott said the system is broken. Show starts with original music as it did in those days, followed by some strong 9/11 questions and news. Rumsfeld wanted “all things related and not related” in that report to get his illegal wars on. Someone tell trump the idiot it wasn’t faulty intel, it was PNAC.