Meria with John Hankey – Is Donald Trump for Real? 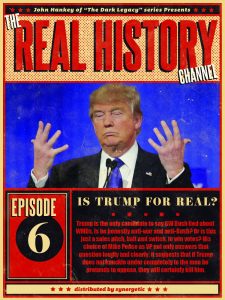 10/30/18 Meria interviews filmmaker, history teacher John Hankey on his latest film “Is Donald Trump For Real?”. Cambridge Analytica’s plot in 2012 for a candidate to take advantage of the 72% that believe 9/11 was an inside job; Creating the psychological warfare, then finding the candidate; trump is Bush 2; Bannon & Cambridge Analytica; Chris Wiley; how to get “believers” to vote republican; Bannon & Ted Cruz; trump on Lee Harvey Oswald and 9/11; Mike Pence the war criminal; anthrax and bombs; same script; “I Was Hitler’s Boss” by Captain Mayer; recruited puppets; Robert Gates and Israeli psy-op group and the election; back to JFK; the Zapruder film edited; Who and why JFK was assassinated; CIA and Watergate; the power elite and much more. Support John’s next movie.

One Response to "Meria with John Hankey – Is Donald Trump for Real?"