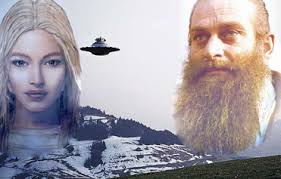 10/21/14 Meria interviews Michael Horn, American Media Representative for Billy Meier on his latest film “He Warned The People, And Did They Listen?“. Let Michael know you are a listener with”Meria” in your order and get a 2nd movie free; Who is Billy Meier? visited since he was 5 years old (77 now);humans in another star system; why suppressed? Classic UFO daytime photos/videos; 26,000 published papers;prophetically accurate information 50 yrs earlier; 22 attempts on his life;info could be destabilizing to the controllers; suicidal success for planet Earth? Henoch Prophecies; can prophecies be prevented?1951 prophecies (happened); 1958-computers, cell phones,AIDS and more. Predictions different than prophecies;ebola epidemic predicted;2 coming US civil wars? Will there be WW3? is their collusion between aliens and governments? holograms in use; climate change; HAARP’s damage;militaristic insanity;religious delusions;Plejarens; 800 yrs of difficulties? Obama; Mothers of the millennium; and much more.