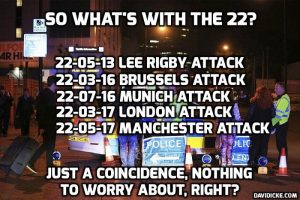 5/24/17 Meria Interviews Richie Allen of the Richie Allen Show. Richie is close by the Manchester Arena and people did die; the Arena itself, size and access; Salman Abedi – who is he? ID survives again; the bomb was not detonated inside the arena; were there drills? the number 22; JFK 11/22/63; how did his ID survive? LIHOP vs. MIHOP; drugs and suicide bombers; timing pre-election; Operation Tempora put in place, 5,000 troops on the streets; critical terrorism warning; programmed to accept a police/military Orwellian state;Who benefits? Posse Comitatus; What Colonel Richard Kemp had to say on deportations;FCC policing broadcasting; the reptilian agenda; trump’s behavior and lots more.

One Response to "Meria with Richie Allen"