Posted about 9 years ago | 5 comments 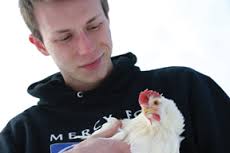 2/4/14 Meria interviews her favorite hero Nathan Runkle, founder of Mercy for Animals. How they came to be; 15th anniversary this year! what is thumping? male chicks and the egg industry; are dogs biological garbage? Russia thinks so; slaughterhouses and public health/food safety; slaughter vs. picking apples; why do his videos disturb people so much? Why is vegan such a nasty word? compassionate/ethical eating; meat consumption in US dropped 12% in 2007; vegan as a status symbol or compassion? variety of plant based diets; quinoa voted #1 new food; Free veg starter kit – 32 pages! Nestle’s DiGiorno pizza and cow cruelty; how we treat the weak and vulnerable says a lot about us; workers PTSD; slaughterhouse workers & Abu Gharib and American prisons; Walmart’s gestation crates for pigs; Amazon’s foie gras; Get McDonalds to include veggie burgers (listen to Meria’s way of doing it) and stick around for the laughs at the end. Great show,true hero.

You can enjoy this show and the other 1,000 hours on site 24/7 with a subscription of choice. Commercial free. Subscribe now.

5 Responses to "Meria With Nathan Runkle – Mercy For Animals"