Posted about 7 years ago | 3 comments 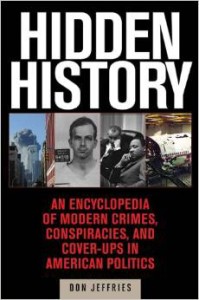 3/31/15 Meria interviews Donald Jeffries on his excellent book “Hidden History,An Expose’ of Modern Crimes, Conspiracies, and Cover-Ups In American Politics”. From the murder of JFK (the mother of all conspiracies) to Barack Obama, Don leaves nothing out. Get this before the 2016 election of another Bush or Clinton. What made the Kennedy family so different? So threatening? the posthumous assassination of JFK;the failure of mainstream media to do it’s job; all liars;why we must keep the internet free;the loss of personal freedoms in such a short time;Collier Brothers;Katherine Harris;stolen elections;bought elections;Presidential rapists:Reagan,Bush,Clinton;the death of Vince Foster; the body count of several presidents and it continues;Gary Webb; where does the money go with charities? Bono’s bogus charity;Huxley & Orwell and so much more.