Blood and Guts with Meria and Jack Blood 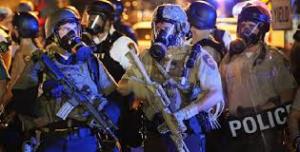 11/26/14 Blood and Guts with Meria and Jack Blood. The real issue in Ferguson: Militarized police killing with immunity and impunity; 500 a yr killed by cops, 3 dead from Ebola; the difference between selling out and integrity;the hubris of public officials; is it all a set-up? Michael Brown case has more holes in it than swiss cheese;Darren Wilson’s “testimony” (months to make it up) incredulous; How the Grand Jury (Star Chamber) works and it’s for the prosecutor; Prosecutor McCullough steered, lied and comes from a family of cops (why didn’t he recuse himself?); announcement at 8 pm? Cops are now judge, jury and executioners and they don’t limit themselves to minorities;2 sets of laws; who wasn’t in Ferguson? parasites, opportunists,mercenaries, FBI, DHS; What has Obama done? Who Eric Holder and Loretta Lynch represent (it ain’t us); what other news is happening while this takes front page? Great show.

2 Responses to "Blood and Guts with Meria and Jack Blood"